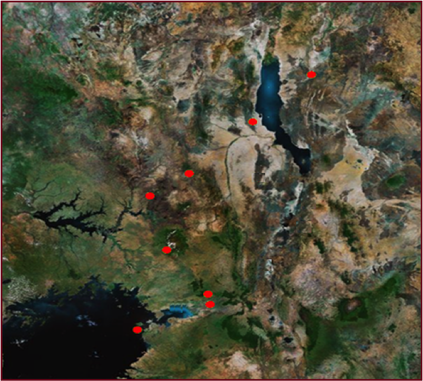 Although the early Miocene fossil sites in Uganda are not as rich as those in Kenya, they have provided some of the most important discoveries in our quest to understand ape evolution. These sites also increase the range and diversity of environments inhabited by early apes and other catarrhines.

Napak
Napak is located in the northeast region of Uganda, with multiple localities spread on and around an ancient volcanic cone. During the 1950’s, remain of a large ape were discovered there, and since then several additional species of catarrhine primates have been found. Napak has been dated to approximately 19 Ma, with different localities perhaps representing different stages of development of the Napak volcano. The site is well known for preserving remains of one of the largest fossil apes from this time, Proconsul major, but also a variety of fossil catarrhine primates such as Dendropithecus, Limnopithecus, Lomorupithecus, and even a cercopithecoid monkey.

Moroto
Moroto is located on the eastern border of Uganda with Kenya. Multiple Ar-Ar analyses have demonstrated that the site is >20.6 Ma. Moroto is the type of locality currently the only one to preserve the enigmatic fossil ape Morotopithecus. Unlike other catarrhines from this time period, Morotopithecus shows evidence of a more upright posture and limb mobility. This may indicate adaptation for vertical postures, climbing, and arm-hanging.

Bukwa
Bukwa is located on the northeastern side of the early Miocene volcano Mt. Elgon. Excavations in Bukwa began in the 1960’s, and preliminary dating suggests that fossils there may date to approximately 22 Ma.