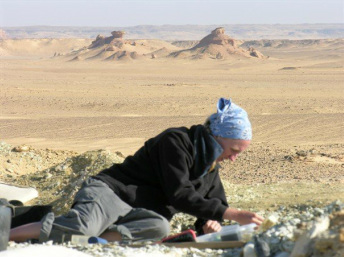 Susanne Cote is a biological anthropologist working in the field and at museums in East Africa, where she studies new and existing fossil collections of primates and other mammals in order to understand the environmental context in which primates evolved.

She has participated in paleontological fieldwork at numerous sites in Kenya including Olorgesailie, the Turkana Basin (Koobi Fora and Ileret regions), and the Tugen Hills (Baringo) as well as at the Fayum in Egypt. Susanne currently conducts fieldwork at the early Miocene sites of Napak, Bukwa, and Moroto in Uganda, as well as in early and middle Miocene sites in West Turkana, Kenya.

Biography: Currently, I am an Assistant Professor in the Department of Anthropology and Archaeology at the University of Calgary where I teach human and primate evolution. Previously, I served as a Lecturer in this department, and also worked for the Alberta Biodiversity Monitoring Institute, Wildlife Conservation Society, and Mercy Corps. I received my PhD from the Biological Anthropology wing of Harvard’s Anthropology Department (now Human Evolutionary Biology) in 2008.